About 112 million Americans will travel between now and New Year’s Day, and that equals about one-third of the population making the decision to go somewhere. AAA spokesperson Robert Sinclair joined FOX Weather on Sunday morning to break down the holiday travel details.

The holidays are upon us as we’re in the final stretch of 2022. So, if you’re one of the nearly 113 million Americans who will travel more than 50 miles to gather with friends and family this year, you’re going to want to plan ahead. This year, the weather is having a significant impact on your travel.

Not only will we see an increase in the number of people driving and flying this year, but the FOX Forecast Center is tracking a Christmas week blizzard that is having a major impact on holiday travelers.

FILE – People walk near a Christmas tree inside the Washington Reagan National Airport (DCA) on December 18, 2020 in Arlington, Virginia.

AAA expects an increase of about 3.6 million people traveling this year versus in 2021, and that number is closing in on pre-pandemic levels.

In fact, 2022 is expected to be the third-busiest year for holiday travel since AAA began keeping track in 2000.

Despite the roller coaster gas prices that we saw in 2022, the number of people who will drive to their holiday destinations is expected to rise about 2 million over 2021 levels, according to AAA.

“About 2% (more) compared to last year,” said AAA spokesperson Robert Sinclair. “We’re not yet back to the total number of travelers that pre-pandemic records in 2019 when 119 million traveled. But we’re getting back there.”

Those traveling by car are on par with the number in 2018 but shy of 2019, when 108 million Americans drove out of town over the holidays.

TRAVELING THIS WINTER? HERE’S WHAT TO KEEP IN YOUR CAR IN CASE YOU GET STUCK

There are some interesting modes of transportation that will see a significant jump over last year.

“What’s most striking is the number in the other category that are traveling by train, bus and cruise,” Sinclair said. “That’s up 23% compared to last year, with the bulk of that increase happening in cruising. Cruising has come back in a big way. People like the one-price aspect. You pay upfront to get your drinks and your meals included. You know exactly what you’re going to pay.”

AAA said air travel is expected to increase about 14% over 2021, with nearly 7.2 million Americans expected to catch a flight out of town over the holidays.

Demand for air travel has skyrocketed, and people should be aware that airports and flights will be packed. AAA expects the number of people catching a flight will come close to matching pre-pandemic levels in 2019 when 7.3 million Americans traveled by air.

Snow is starting to fall across the Plains ahead of the front. The heaviest snow has been and will continue to be across Minnesota where up to 10″ will fall through Thursday morning.

A dangerous blizzard will soon become a bomb cyclone as it wallops the Midwest and Great Lakes. Damaging winds will also spread toward the East Coast and contribute to a travel nightmare for millions ahead of the Christmas holiday weekend.

The winter storm is also ushering in bitterly cold, life-threatening temperatures that will spawn a widespread flash freeze in the Midwest, East and South as heavy rain is followed by temperatures rapidly falling below freezing all the way to Florida, which could see its coldest Christmas in more than 30 years. 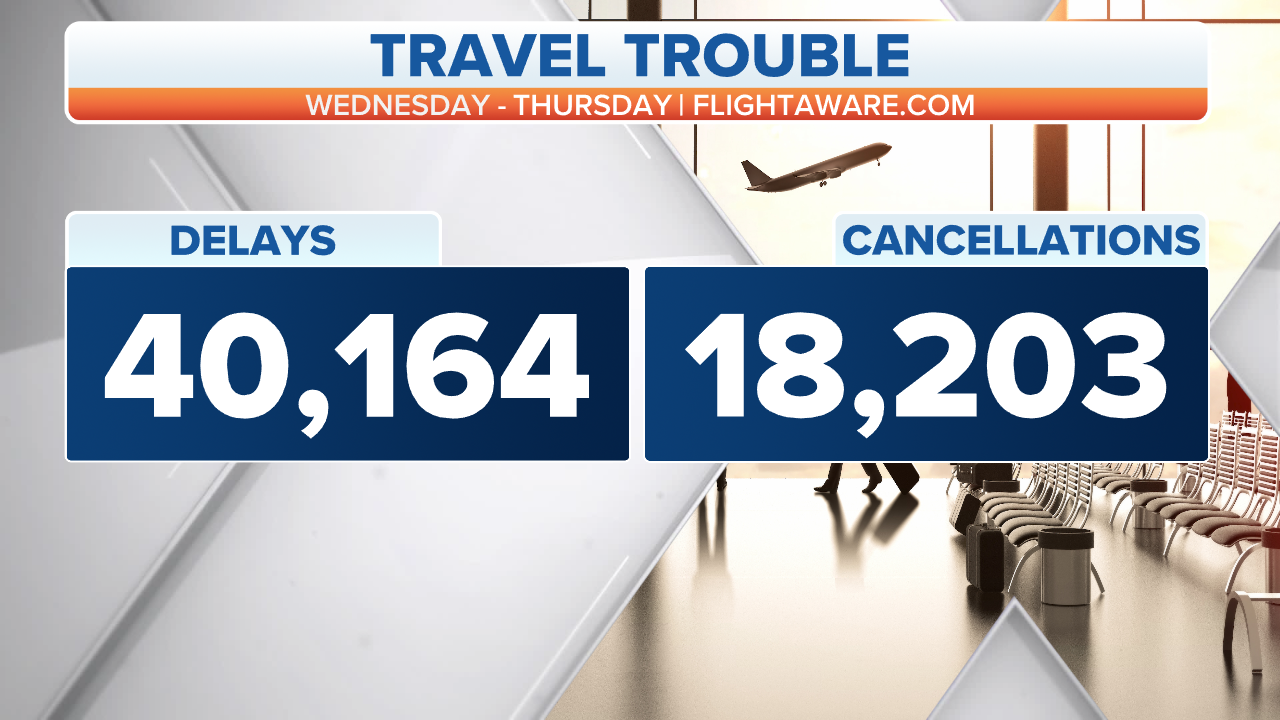 A graphic showing the number of flight delays and cancellations because of a major blizzard and dangerously cold temperatures.
(FOX Weather)

“It could be very, very difficult indeed,” Sinclair said. “We’re anticipating hundreds of thousands of breakdowns during the year-end holiday travel period. You throw in a bad snowstorm into that, and it really wreaks havoc.”

WHAT TO DO IF YOUR FLIGHT IS CANCELED

Sinclair said about half of all bad weather-related crashes occur during one season – winter. It’s upwards of about 2,000 fatalities and more than 500,000 injuries because of snow and ice.

“Drivers really need to slow it down,” he said. “Just take it easy, and really, the best advice is if you can stay home during such inclement weather, do so.”