While early January started with well-above-warm weather across large parts of North America, last week’s weather has been more wintery-like. A Jimenez is almost over, but a new winter storm is brewing on the horizon and will bring a lot of snow across part of the country, from Texas to Maine, mid-this week. A frontal system will also bring new severe weather with the potential for strong winds and a few tornadoes for the deep South and Southeast.

A swath of potentially deep snow will develop from Southern Rockies across the central Plains to mid-Mississippi and Ohio Valley, around the Lakes and farther northeast. Northeast U.S. could see a considerably high amount of snow, as the system is forecast to deepen and could become a Nor’easter winter storm late this week. 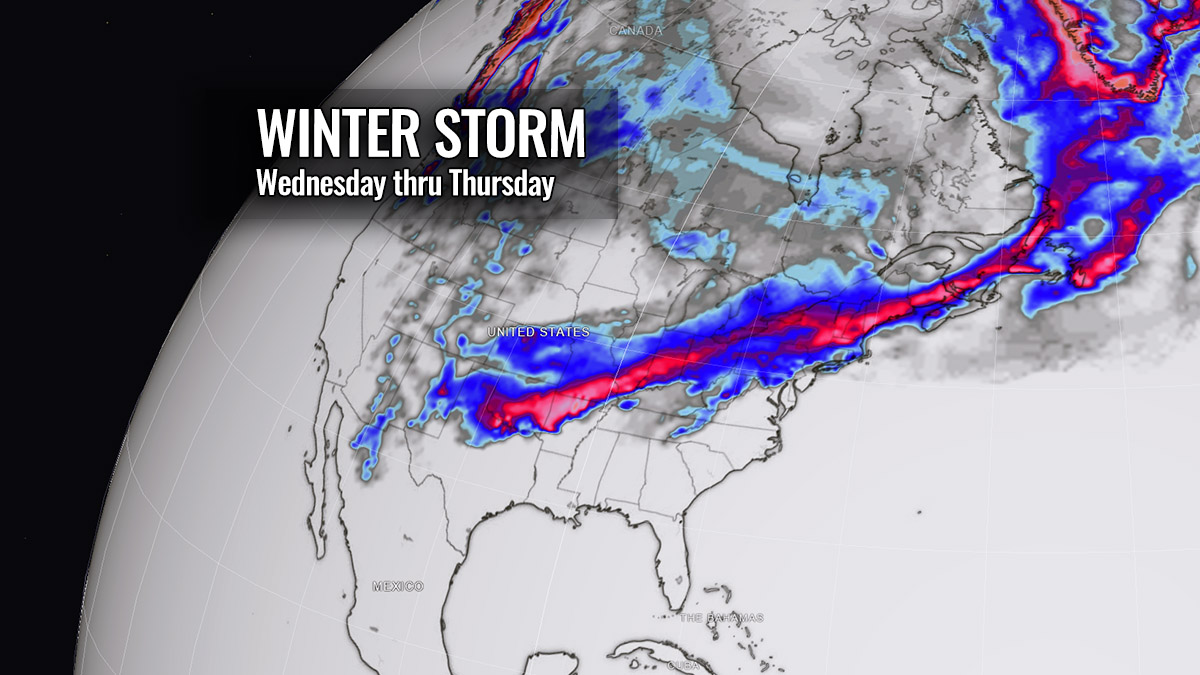 Over the weekend, a departing storm Jimenez left a decent amount of snow across the central Plains and Midwest to the Great Lakes. The below satellite image from Sunday reveals a cold front moving into East Coast, extending down to the Gulf Coast.

Fresh snow is observed from Colorado and Kansas to Iowa, Missouri, and further northeast. 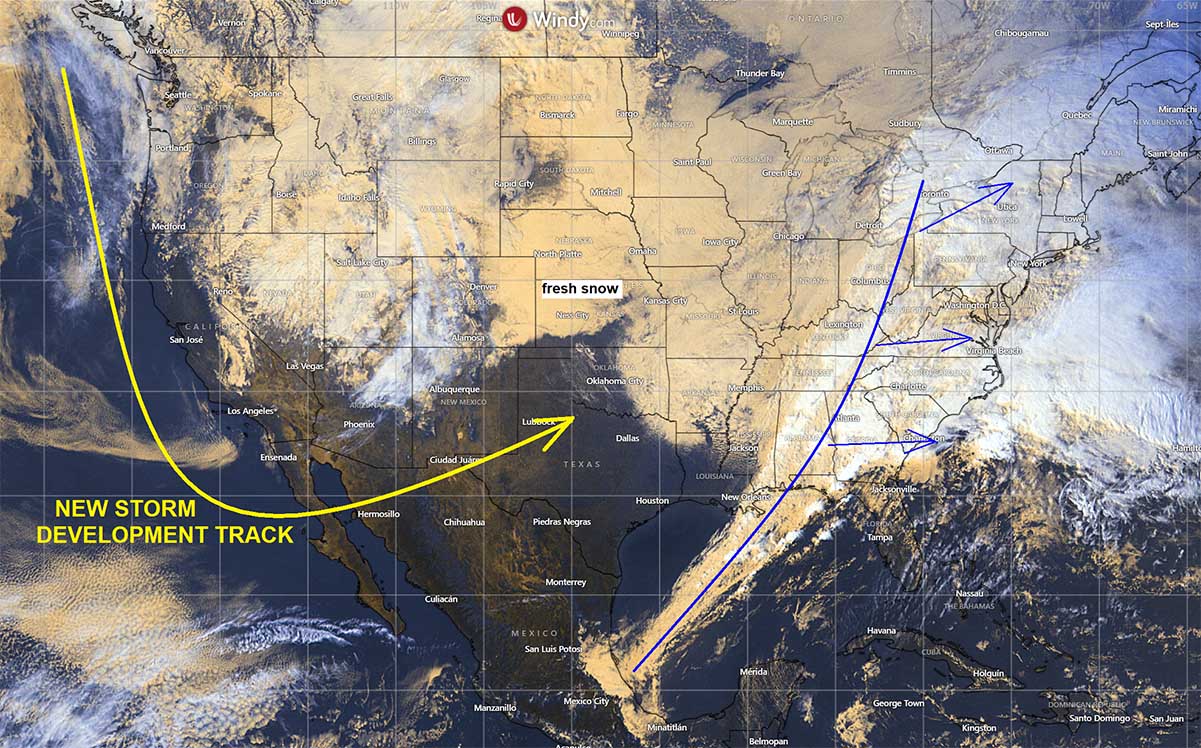 Along the West Coast of the U.S., a new wave in the upper levels of the atmosphere is taking shape. It will slide far south into Southwest U.S. and deepen its core into a cold-core low, moving onto the Southern Plains towards Tuesday.

Below is the overview for this week. A new wave emerges across the Southern Rockies, releasing a new winter storm from New Mexico into Texas and Oklahoma on Tuesday. The system then considerably strengthens while moving across the central United States towards the Northeast. Blanketing millions across the country from the Plains to Ohio Valley and Maine on Wednesday and Thursday.

Along and ahead of the winter storm Kassandra, severe weather will spread from eastern Texas across the Lower Mississippi Valley to Southeast U.S. from Tuesday through Wednesday night. Behind the storm, much colder air is expected to plunge from the north later next week, likely extending into the final weekend of January 2023.

Let’s take a detailed view of the potential impacts as the new weather system emerges across the country this week.

Winter Storm develops on Tuesday, strengthens while moving towards Northeast on Wednesday and Thursday

This week’s general weather pattern across the Contiguous U.S. reveals a large wave emerging from the west, developing a deep frontal system across the southern Rockies into the Plains on Tuesday. The low considerably deepens Wednesday as it tracks from Texas and Oklahoma towards the low/mid-Mississippi Valley.

With a powerful jet stream sliding across the Rockies, the upcoming winter storm has a high potential to spread the snow across more than 20 states. While the swath will not be wide, it will continue from New Mexico to Maine. 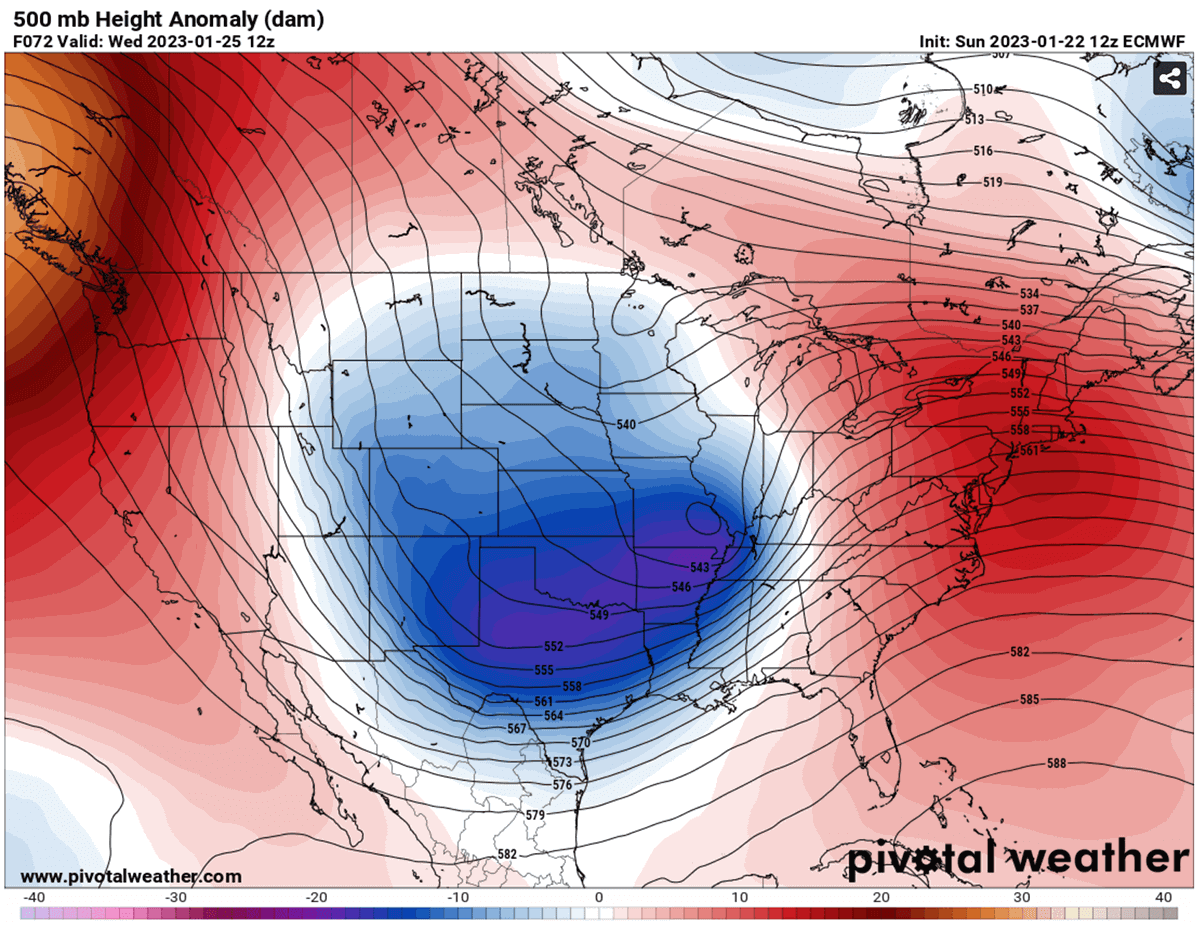 The deepening upper low results in the surface frontal system over eastern Texas late Tuesday, gradually deepening its central pressure while moving east-northeast Tuesday night. At the same time, the high-pressure system builds up across the west and northwest portions of North America. This results in wind flow turning more northerly across the Plains, delivering cold towards the south and the developing winter storm itself.

At the same time, deep moisture is being dragged from the Gulf of Mexico northward, resulting in widespread rainfall and severe weather across the Gulf Coast Tuesday night. High moisture also transports into the cold side of the new winter storm Kassandra, fueling the heavy snow across parts of the southern Plains. 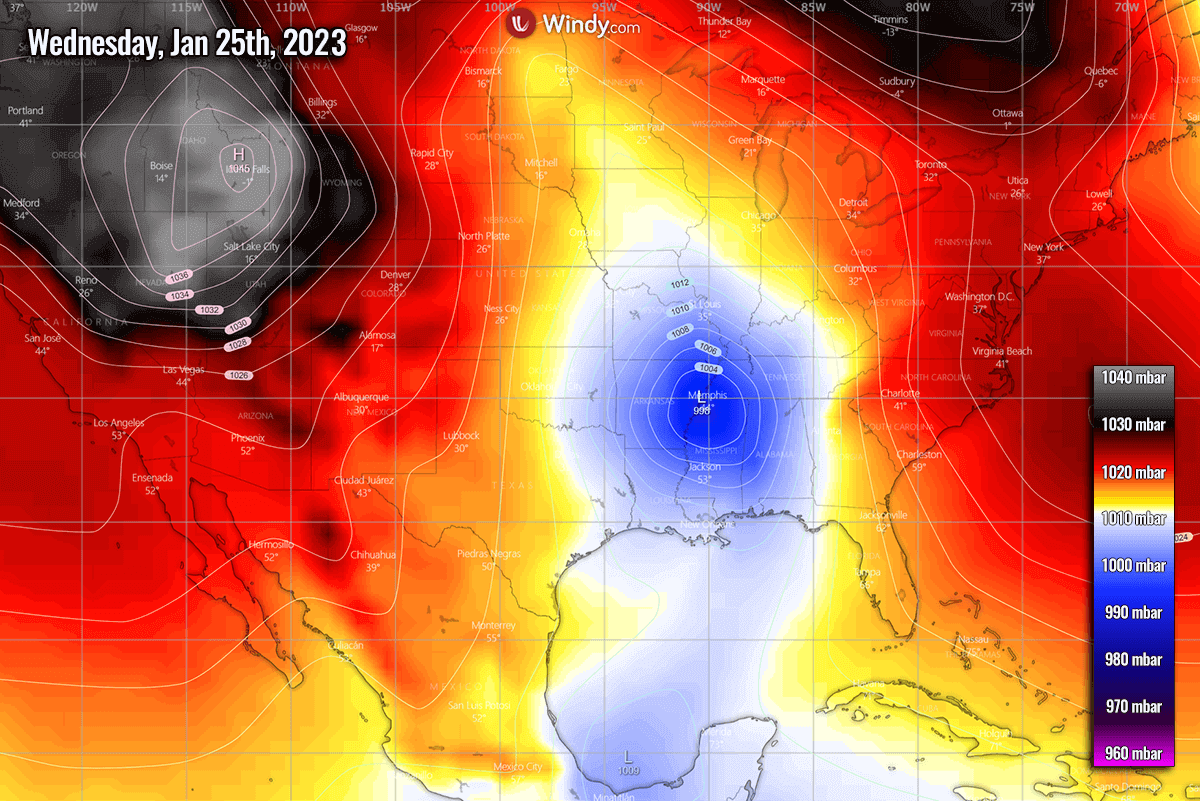 This frontal system is forecast to produce heavy showers and thunderstorms along the Gulf Coast from Tuesday late afternoon and Wednesday night and Thursday morning. Some thunderstorms are likely to become severe from southeastern Louisiana to southern portions of Mississippi and Alabama and into the western Florida panhandle.

The new winter storm will be tracking a bit farther south than the recent storm Jimenez. With the main impact including parts of Oklahoma, Texas, and Arkansas. And later on, also farther northeast across the Ohio Valley. Snow will become heavy as a winter storm intensifies in the Southern Plains on Tuesday.

Lubbock, Texas, Oklahoma City, and Tulsa, Oklahoma, are forecast to receive some accumulated snow by late Tuesday. About 5-8 inches will be possible. Over the night to Wednesday, snow will spread from Texas and Oklahoma further east-northeast into the Midwest. This includes major cities St. Louis, Indianapolis, Cleveland, and possibly Chicago.

Depending on how far south the cold will reach, even Dallas-Fort Worth metroplex could see some snowflakes mixing late Tuesday evening. DFW Airport has last time seen snow last February, while the average is about 1.5 inches per year. 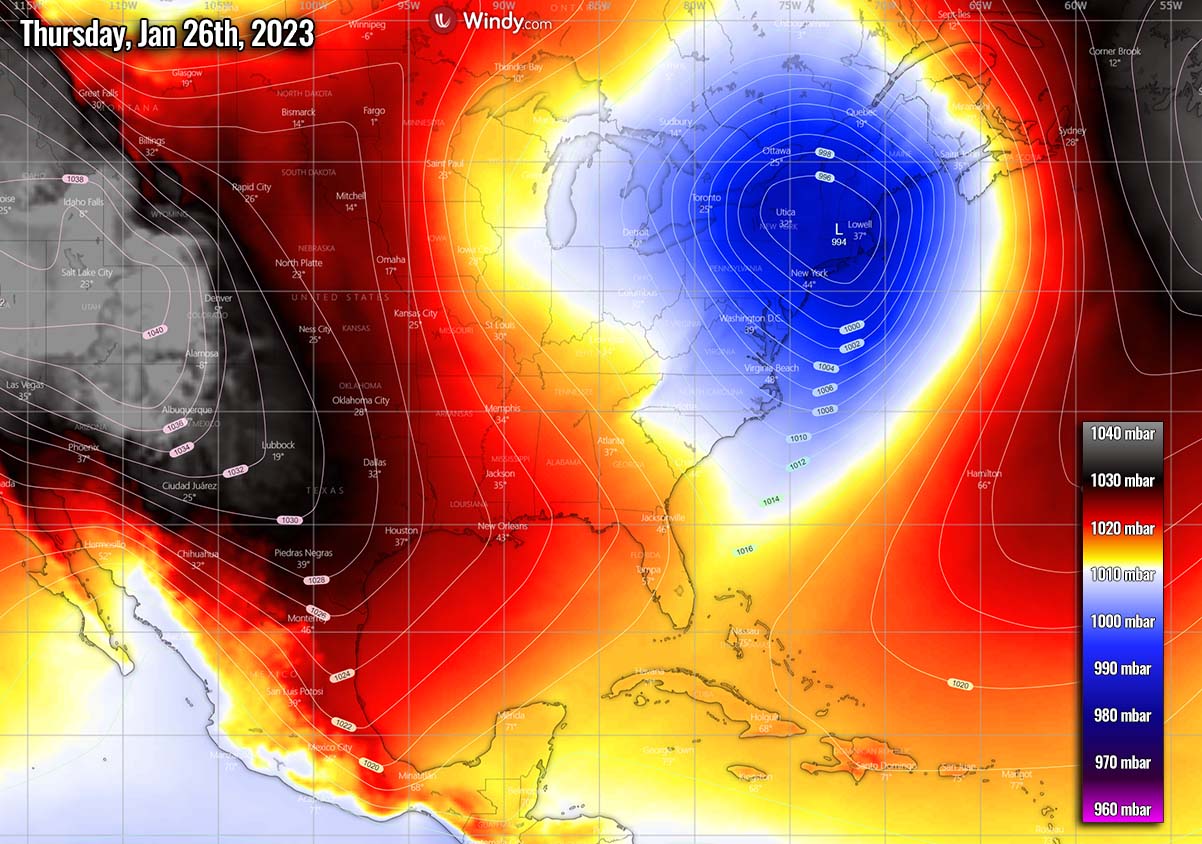 The system will continue moving northeast late Wednesday into Thursday, potentially becoming a deep surface low over the Northeast U.S. It may become the next Nor’Easter storm on Thursday into Friday. With heavy snow and blizzard increasingly likely to develop.

The amounts of snow strongly depend on where the surface frontal system and the core of the winter storm develop. Weather models are quite a good agreement that a swath of heavy snow will extend from the Texas Panhandle and Oklahoma to the interior Northeast.

Some new snow is also forecast across the eastern slopes of the northern Rockies, central Montana, and Wyoming as winds will drag the high moisture into the mountains. 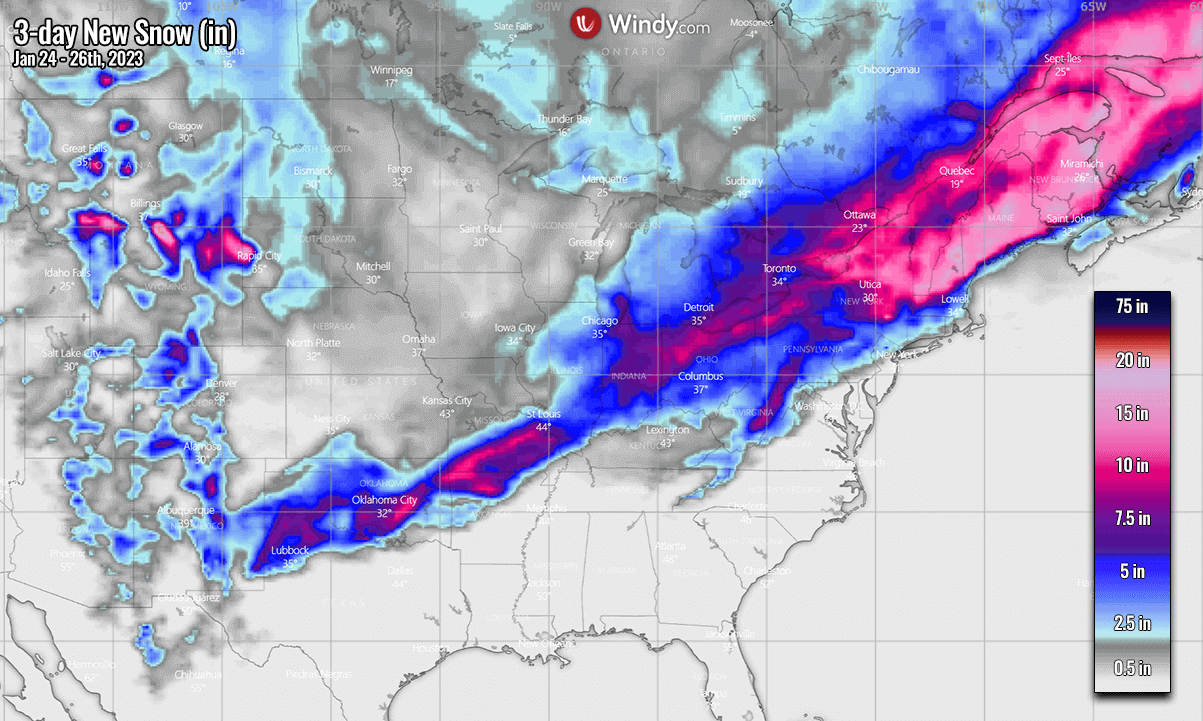 Where exactly will the highest accumulation develop is hard to predict until the winter storm forms. Still, considerable snow is forecast from the Panhandles across central Oklahoma to northern Arkansas and southern Missouri.

Snowfall will begin Tuesday afternoon, and some areas could receive up to 8-10 inches of snow by Wednesday morning. 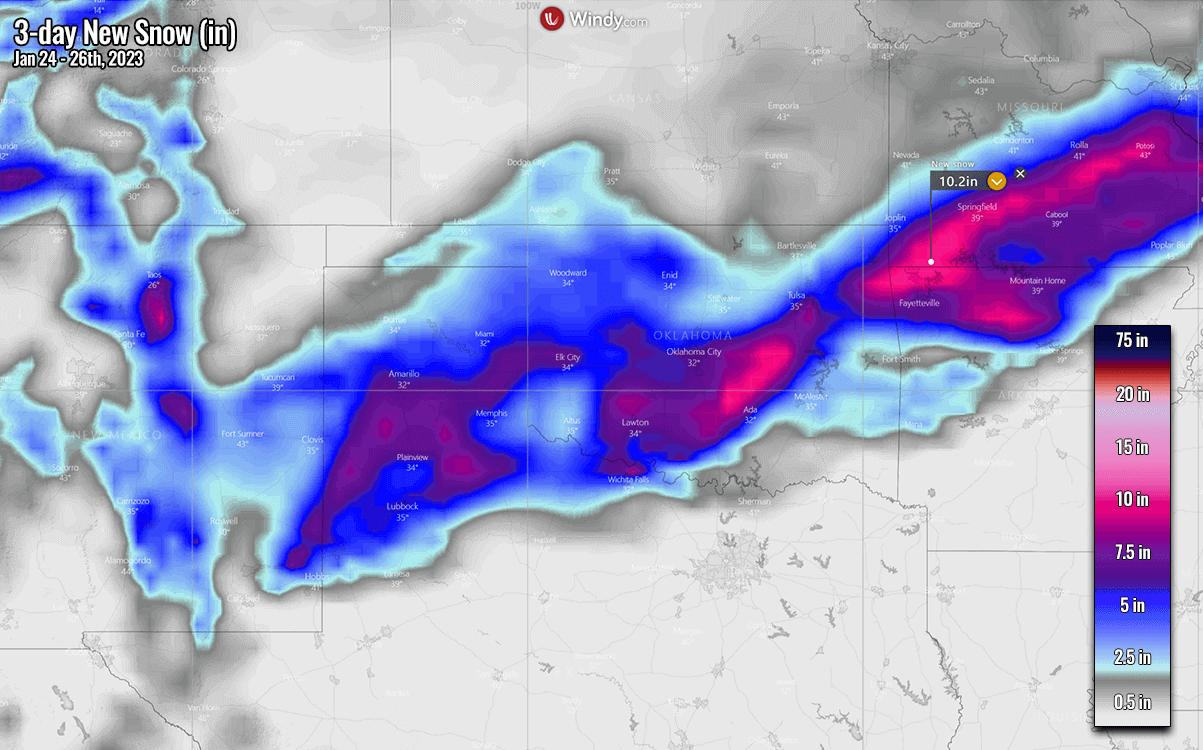 As the system tracks towards the Ohio Valley, a strong jet stream aloft could significantly impact the snow amounts for the region. On the average model track, the most likely path of Kassandra will be from South Texas and Louisiana towards northeast into Pennsylvania by Wednesday night.

This will bring major cities into the impact of heavy snow, including St. Louis, Chicago, Cleveland, Detroit, and later on, Buffalo, NY. The forecast amount of snow varies from 5-10 inches along the swath of this winter storm. 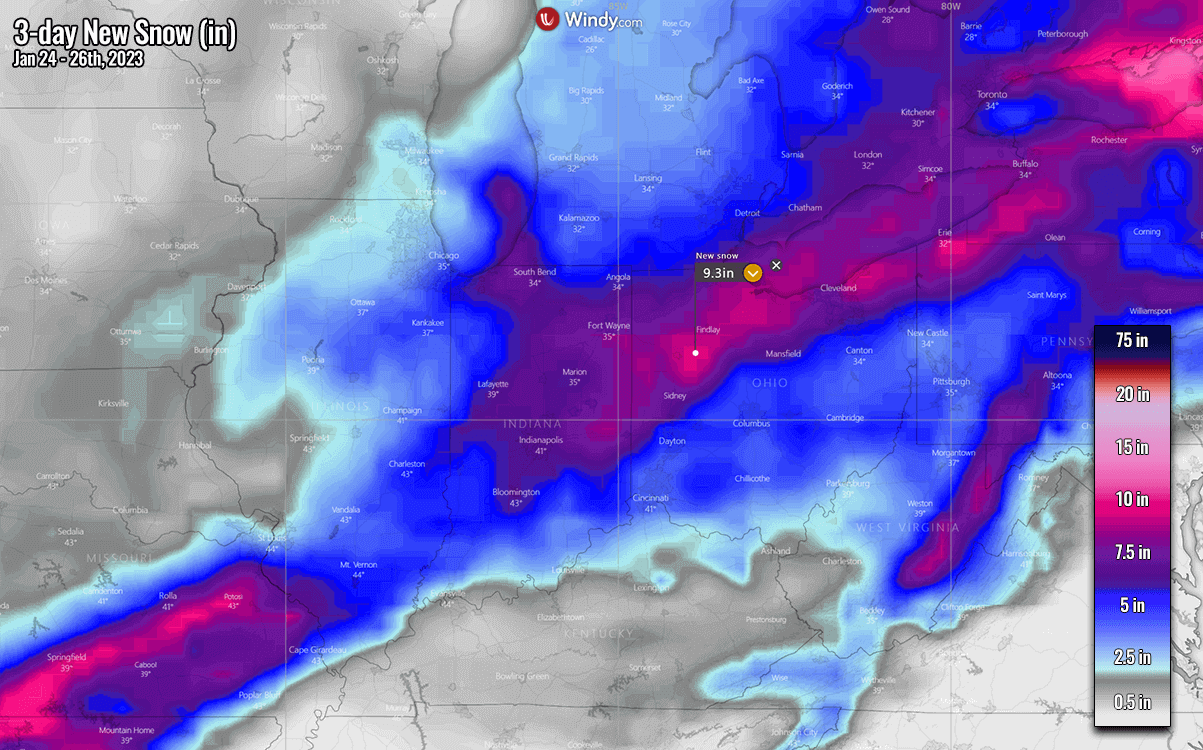 Farther northeast, the heaviest and most abundant snow will likely develop across northern New York and New England on Thursday. The system will likely dump wind-driven snow in the interior Northeast. Vermont, New Hampshire, and Maine will be blasted by heavy snow and blizzard conditions. They are resulting in potentially more than 20 inches of snow by late Thursday. Travel delays are expected.

​Boston is also likely to see snow, although the potential storm track is forecast to pass the city a bit farther north. 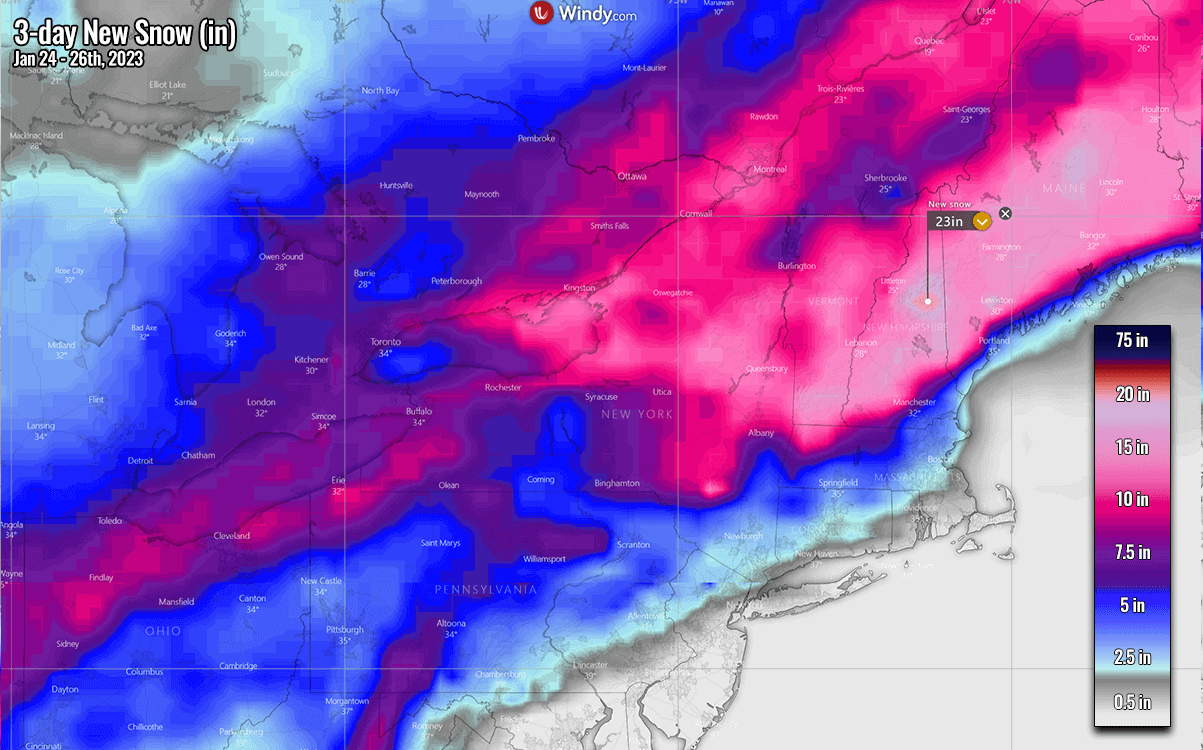 New York City and Philadelphia will also stay out of the snow again.

Associated with deep wave aloft, a strong jet stream will also overspread the southern U.S., thus creating a supportive environment for severe thunderstorms from eastern Texas across the lower Mississippi Valley to Alabama and northern Florida.

Storms will begin across eastern Texas on Tuesday afternoon as the winter storm farther north strengthens. The vigorous jet stream winds and high moisture transporting from the Gulf of Mexico should develop severe thunderstorms.

Far eastern Texas to south-central Louisiana will be in the main swath of the most intense storms. Those could bring heavy rain, severe winds, and possibly tornadoes. 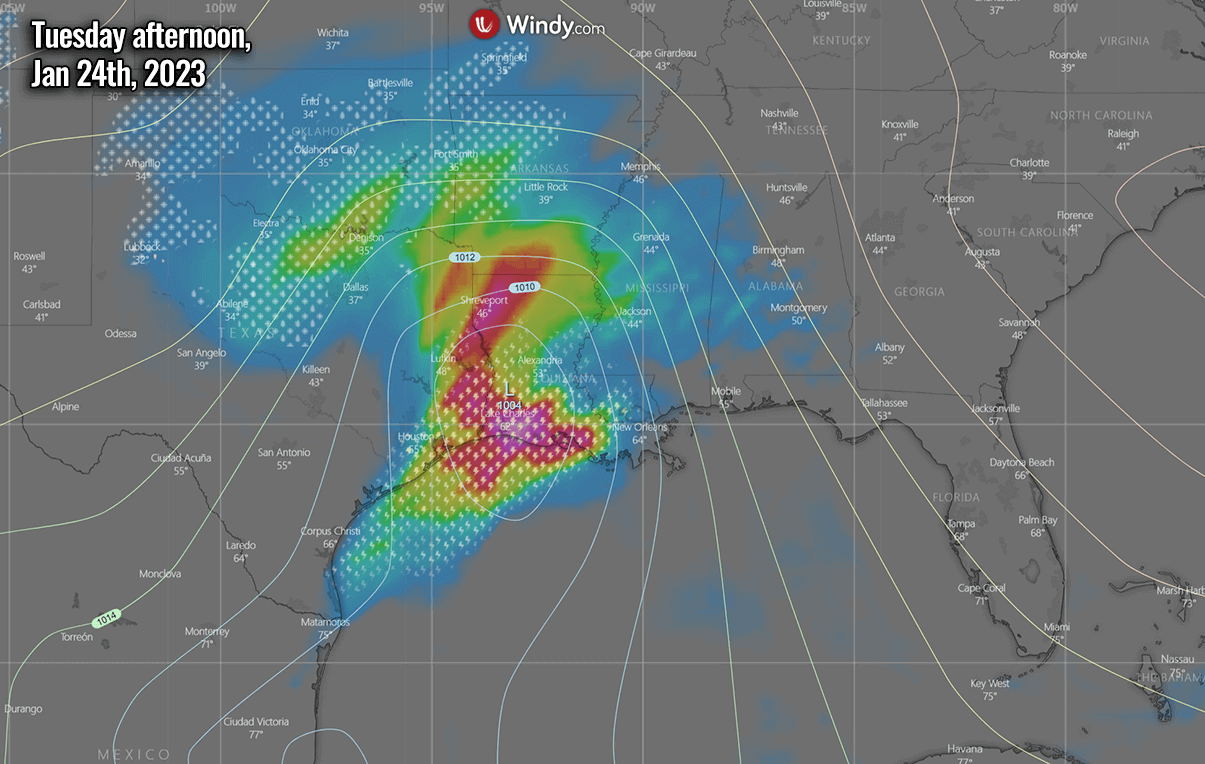 With deepening surface low and a strengthening winter storm towards the Ohio Valley on Wednesday, the main cold front of the system will extend from North Carolina across Alabama and Georgia to the eastern Gulf Coast Wednesday afternoon.

Thunderstorms, including severe storms, are likely to re-develop again and rapidly spread from west to east across Alabama and Florida Panhandle to Georgia into the Wednesday evening hours.

The developing High on the west and the frontal system across the central and eastern portions of the United States will drag much colder air for the south on Thursday. Temperatures are forecast to be around 20 °F lower than normal for late January. 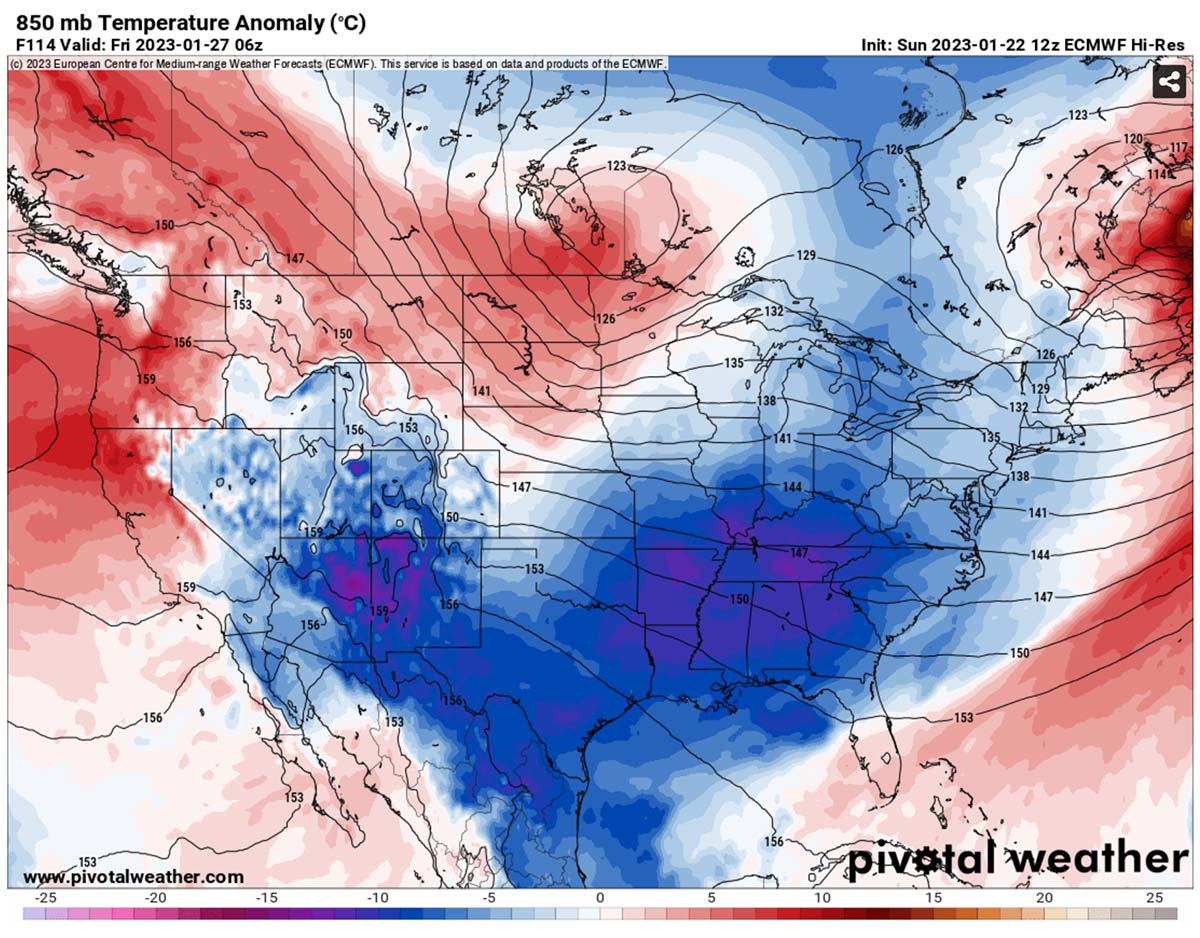 Expect Thursday and Friday to be cold for the southern states, from New Mexico, Oklahoma, and Arkansas into Texas and the lower Mississippi Valley.

Southeast states will also be much colder than recently, but the cold will not be long-lasting. 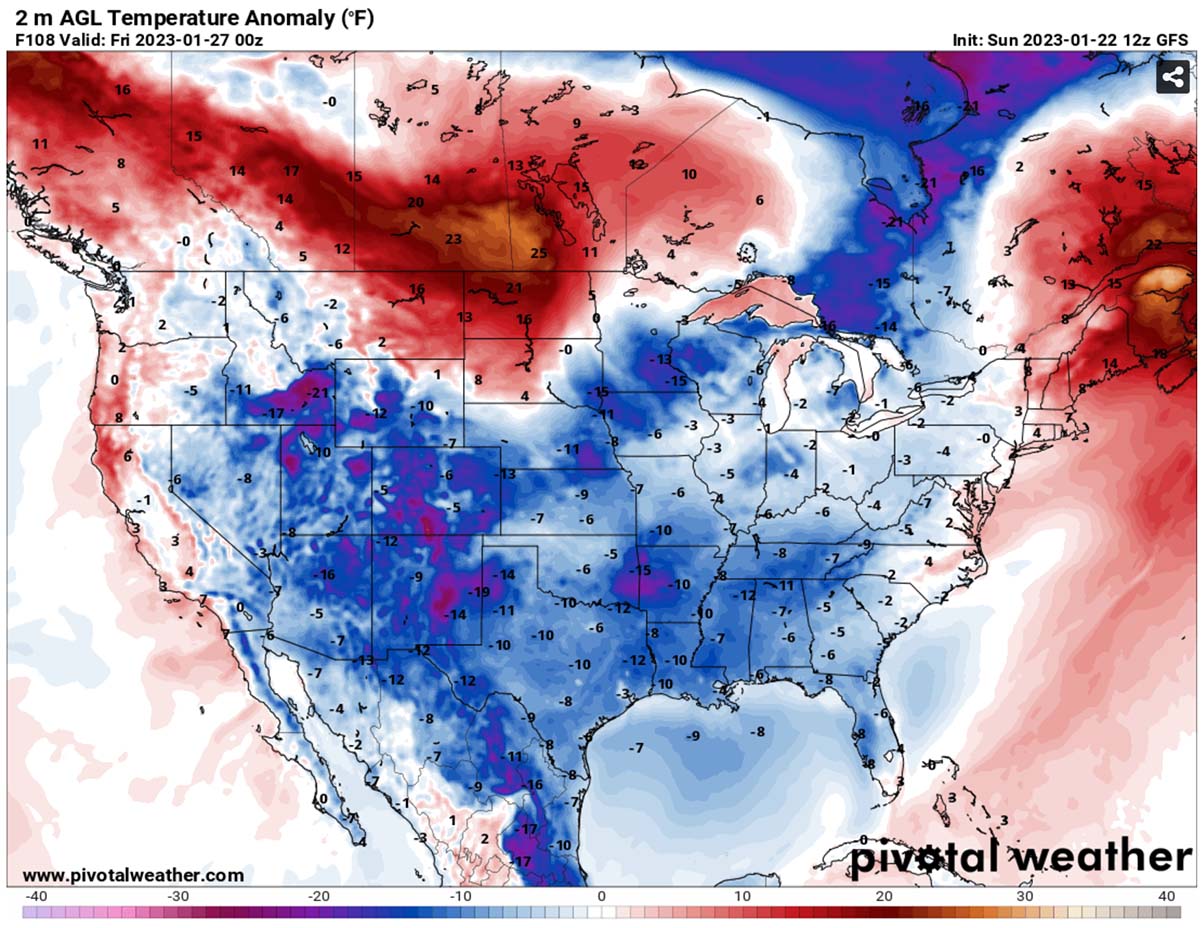 Temperatures will be gradually warming up again into the weekend as conditions improve, and the effect of the Winter storm will diminish once it ejects the Northeast U.S. Friday night.

Stay tuned as we will continue covering the most extreme weather events that have the potential to impact many around the planet.

Windy, Pivotalweather, and Wxcharts provided images used in this article.

A strong Stratospheric Warming event is about to start, impacting the Polar Vortex as we head into the final month of the Season