Now two dominant crab harvests have been canceled for lack of fish. For the first time, the Alaska Department of Fish and Game in October canceled the 2022-2023 harvest of Bering Sea snow crab, and it also announced the second consecutive year of closure for another important harvest, that of Bristol Bay red king crab.

What has happened between then and now? A sustained marine heat wave that prevented ice formation in the Bering Sea for two winters, thus vastly altering ocean conditions and fish health.

“We lost billions of snow crab in a matter of months,” said Bob Foy, director of the National Oceanic and Atmospheric Administration’s Alaska Fisheries Science Center, at a public forum held Dec. 12 at the Anchorage Museum of History and Art. “We don’t have a smoking gun, if you will. We don’t have one particular event that impacted the snow crab — except the heat wave.”

That heat wave is now over, but its effects linger. A NOAA survey showed an 80% decline in Bering Sea snow crab, from 11.7 billion in 2018 to 1.9 billion this year. It could take six to 10 years to recover, experts told members of the North Pacific Fishery Management Council, which wrapped up a 10-day meeting in Anchorage on Wednesday.

Snow crab may be the “poster child” of climate change, council member Bill Tweit said during deliberations on a rebuilding program that was ultimately approved at the meeting, but much more will be affected by the long-term changes in the ocean.

“It’s going to be more and more a problematic question for us among a broader range of species than just snow crab,” Tweit said.

In the short term, loss of the snow and red king crab harvests is devastating. Direct losses from harvest cancellations this year amount to $287.7 million, according to state estimates. Local governments are suffering, too, like the Aleut community of St. Paul, which relies on the crab harvests for more than 90% of its tax revenue. 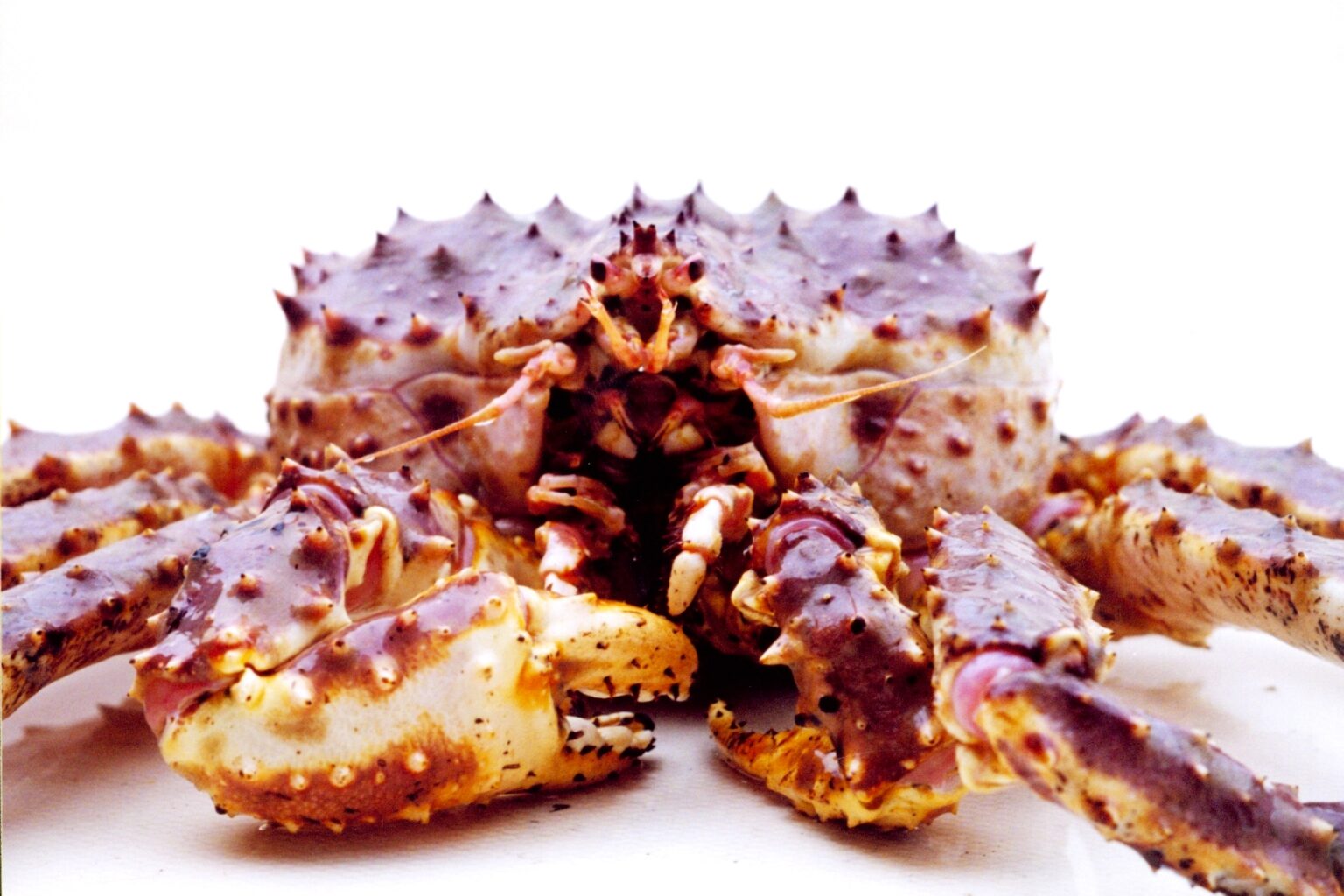 A close-up view of an Alaska king crab is seen in 2019. (Photo by Julia Brownlee/National Oceanic and Atmospheric Administration)

There are limits to what the North Pacific Fishery Management Council can do to manage crab stocks. Crab harvests are managed by the state, even for stocks existing in federal waters, though the council and federal agencies provide support and scientific information to assist and cooperate in that management. However, the council and associated federal agencies do have the power to regulate other fisheries that might affect the crab – and that is what crab fishermen and crab-dependent communities asked them to do.

Alaska Bering Sea Crabbers, a nonprofit trade organization, petitioned the council to use its emergency powers to ban all fishing for six months in areas designated as protected zones for red king crab. In those areas, crabs mate and molt, spending much of their time in a vulnerable soft-shell stage. That puts the crabs at high risk for being crushed and killed by trawl nets that hit or scrape the seafloor, the organization argued.

Warm temperatures may have wiped out much of the crab population, but that is not something that can be corrected immediately, said Jamie Goen, Alaska Bering Sea Crabbers’ executive director.

“Our concern as crab fishermen is we need to focus on the things we do have control over, and that’s really fishing impacts and habitat protections,” she said at the museum forum, which was organized by the Anchorage Daily News and the Seattle Times.

The council ultimately declined to take such emergency action, which critics said might not be effective and would have unintended consequences. They include pushing the trawl fleet into different territory, where there might be higher incidental catch of salmon or other problems. Instead, the council opted for a plan to study alternatives that include possible fishery closures in the key red king crab mating and molting areas. And the snow crab rebuilding plan it approved leaves open the possibility of a small harvest conducted as the stock recovers, which is important to industry representatives who voiced concerns about losing their position in the wider seafood markets.

“Once you lose that space at the buffet table and they fill it with shrimp or lobster, it’s really hard to get that back,” said John Iani, president of the North Pacific Crab Association, a Seattle-based organization of processing companies.

There is plenty of competition for the market slice held by Alaska snow crab and red king crab.

Stockpiles of Russian king crab are still being sold – even recently at an Anchorage Costco – though the U.S. government has banned further imports of Russian fish due to Russia’s invasion of Ukraine. Snow crab is harvested in eastern Canada, where stocks remain healthy, and in the Barents Sea off Scandinavia, where it is a relatively new species.

There is other Alaska crab on the market, too, though not as celebrated. Harvests of golden king crab, a species smaller than red king crab, are proceeding, and a relatively small harvest of red king crab in Norton Sound, in the Nome area, that is expected to open in 2023, though in two recent years it was shut down because of low stocks. Dungeness crab harvests continue in Alaska, as in other West Coast states. The Alaska Department of Fish and Game last week announced that a tanner crab season will open in 2023 in the Aleutians area.

There are other positive signs in the Alaska marine environment, according to the ecosystem reports presented to the council.

After successive years of low ice and high temperatures, a normal freeze returned to the Bering Sea last winter, scientists told the council. That resulted in the return this summer of an average-sized “cold pool” – the section of ultra-chilled water that serves as a thermal barrier separating habitats in the northern and southern Bering Sea. Seabird populations, many of them substantially reduced in recent years, are now showing reproductive successes, the scientists said. Some fish populations, including pollock and Bristol Bay-bound sockeye salmon, have actually thrived in the warmer conditions, the scientists said.

But there are also persistent signs of trouble. Ocean temperatures in certain areas, like the Aleutians, remain high. Steller sea lions, an endangered population in western Alaska, continue to decline in the western Aleutians. Northern fur seals, which congregate in the Pribilof Islands, are in a long-term decline.

The future of the Bering Sea appears to depend on whether humans take action to reduce greenhouse gas emissions that are warming the planet, NOAA fisheries biologist Elizabeth Siddon told the council on Dec. 11.

A “high-mitigation” scenario, with big reductions in greenhouse gas emissions, will result by the end of the century in “a Bering Sea that’s only slightly warmer but pretty similar to current conditions,” Siddon said. But under a business-as-usual scenario, with very little progress to reduce greenhouse gas emissions, the Bering Sea will be “much warmer than we would have observed to date,” she said.

Foy, speaking at the museum event, said the peak Bering Sea temperatures seen during the heat wave are unlikely to become normal anytime soon. But marine heat waves are expected to become more frequent, overlaying an ongoing and gradual rise in ocean temperatures, he said.

“It’s the impact on an ecosystem of those heat waves that worry scientists the most,” he said. “Because the data shows that the animals can’t adapt. If they can’t move, if they can’t grow, if you don’t get enough year classes in a row to sustain a fishery, then that’s when we have difficulty of fishery and communities and large-scale economic issues.”

Yereth Rosen came to Alaska in 1987 to work for the Anchorage Times. She has been reporting on Alaska news ever since, covering stories ranging from oil spills to sled-dog races. She has reported for Reuters, for the Alaska Dispatch News, for Arctic Today and for other organizations. She covers environmental issues, energy, climate change, natural resources, economic and business news, health, science and Arctic concerns – subjects with a lot of overlap.

This article appears courtesy of the Alaska Beacon  / CC BY-NC-ND 4.0. It may be found in its original form here.

The opinions expressed herein are the author’s and not necessarily those of The Maritime Executive.