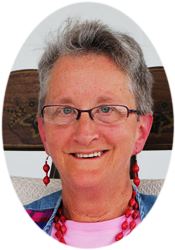 Donnell-Wiegand Funeral Home in Greenville is in charge of arrangements. Visit DonnellWiegand.com to send condolences.

For those who desire, memorials in Elaine’s memory may be made to the Pregnancy Support Center in Greenville, IL or to The Florida Holiness Campground, Lakeland, FL directly or at the Donnell-Wiegand Funeral Home in Greenville.

Elaine Rae Vanderhoof, the daughter of Russell M. Vanderhoof and Bernice L. Ammerman Vanderhoof was born on September 5, 1948, in Lexington, KY, during the time her father was attending Asbury Theological Seminary in Wilmore, KY. As the child of a Free Methodist pastor, she lived in Dallas, TX; Bowman’s Creek, PA; Wilkes-Barre, PA; Kingston, NY; Nescopeck, PA; and Mason City Iowa.

Elaine graduated from Mason City High School (Mason City, IA), class of 1967. She attended Roberts Wesleyan College (N. Chili, NY) for three semesters. In 1969 she was inducted into the Army. She did Basic Training at Fort McClellan, AL, Medic Training at Fort Sam Houston, TX, and On-the-Job-Training at Walter Reed, Washington, DC. She was stationed in Fort Lewis, WA, and Ft. Ord, CA. In 1971 she married Hans J. Lenz. Both received orders and went to Vietnam. They were divorced in 1973.

While in Vietnam, Elaine was a MASH (Mobile Army Surgical Hospital) nurse and was honorably discharged from the Army upon her return to Ft. Ord, CA. She returned to college and received a B.A. from Spring Arbor University, Spring Arbor, MI, (1976). She joined the National Guard in Chicago while living in Woodstock, IL, and was in attendance at O’Hare International Airport when the DC10 crashed with no survivors on May 25, 1979. She lived in El Paso, TX, for a short time before moving to Greenville, IL, where she resided for the next 34 years. She joined the Army Reserve unit in St. Louis and was put on active duty to attend a Respiratory Therapy School in Ft. Sam Houston, TX. It was there she hurt her back and subsequently received a medical discharge with disability. She retired from the Reserves in 1989.

In 1992, Elaine married Daniel Andrew Kilmer, and spent seven years with “the love of her life.” Following diagnosis, treatment, and remission of cancer in 1997, Elaine became a cancer survivor. Her husband, however, died of cancer two years later in 1999. Raising no children of her own, Elaine’s affections spread out to her siblings’ children and she became an amazing role model to them and the next generation.

During her years in Greenville, Elaine worked at Hillview Manor Nursing Home (later, Greenville Gardens) and volunteered at the Pregnancy Support Center. She taught computer classes for adults. She was a Charter member and life member of AMVETS Post 140, serving as chaplain of the organization since it was started, and was the recipient of the Bond County Veterans Appreciation Award in 2001. She was a member of the Free Methodist Church, where she loved teaching the children and singing in the choir. She also served as a nurse for the F.M. camp for handicapped children. She sang in presentations of Handel’s Messiah more than 30 years. She took classes and received and a Master’s degree from the University of Phoenix (1998).

Beginning in 2010, Elaine became a “snow-bird” on the Florida Holiness Campground in Lakeland, FL, during the winter months. She loved Florida and became a permanent resident there in 2013 and lived there the rest of her life other than the three years from 2019 to June 2022 when she lived in St. Charles, MO. In Lakeland, she sang in the choir and was a faithful member of the handbell choir for 10 years. She was a volunteer nurse at the Talbot House Free Clinic for six years. Following a series of strokes in December, 2022, she died peacefully in her own beloved trailer home on the Florida Holiness Campground.

Elaine’s gift of caring for others found an outlet in missions over the years. During spring break in 1969 she went to Spanish Harlem in New York City as part of a VISA team (Volunteers in Service Abroad). She served as a nurse on subsequent VISA/missions tours to Puerto Rico, The Dominican Republic and Haiti (summer 1976), Brazil (summer 1979) and on two later mission trips to Mexico (summer 1985) and Bolivia (summer 2011). She served as a missionary nurse under the Free Methodist Mission Board for one year in Rwanda where she “left her heart” (May 2006-March 2007). While there she also taught Secondary School Level Computer, did hospital administration and community outreach.

Among her many interests was a love for music—listening and singing and playing handbells. She enjoyed fishing and had several “fishing buddies” in Greenville throughout her years there. Her wedding anniversaries were celebrated each year fishing with Dan. They also spent many hours together watching the nearby nesting eagles. She appreciated good programs and movies. Favorites included Fiddler on the Roof, It’s a Wonderful Life, and Babylon 5. And she never missed Jeopardy if she could help it! She was not a sports fan, but always watched the Army/Navy football game, cheering vigorously for Army. She was a true scholar and an avid reader in a wide variety of genre. She spent hours each day studying the Word of God.

Elaine loved the USA. She was passionately patriotic and thoroughly educated herself in the politics and government of the United States from an early age. She kept herself knowledgeable of current events around the world as well. She prayed for scores of missionaries and financially supported some, along with children in the third world. She loved Israel and from the age of 8, was immensely proud of the fact that a nation (the modern State of Israel) had been born the same year that she was born. A highlight of her life was her trip to Israel in January 2018.

Above all else, Elaine loved her LORD and Savior, Jesus Christ. She first “gave her heart to Him” at four years of age, and served Him faithfully and wholeheartedly throughout her lifetime. Near the latter years of her life, she began studying the Jewish roots of Christianity and began to call herself a “Torah-Observant Christian who loves Yahweh with all of her heart.” She attended the Festival of Sukkot in Chandler, OK, for several years. She attended Beit B’Resheet Messianic Congregation in Overland, MO, and the congregation Beit Tehila in Brandon, FL. She loved to sing and dance and blow her shofar. Throughout her lifetime, she immersed herself in the Word of God, and endeavored to love the LORD her God with all her heart, soul, mind, and strength, and to love her neighbor as herself, serving Him faithfully in nine countries around the world.

“As for me, I am already being poured out on the altar;

yes, the time for my departure has arrived

I have fought the good fight, I have finished the race, I have kept the faith

All that awaits me now is the crown of righteousness which the Lord,

will award to me on that Day—

and not only to me, but also to all who have longed for him to appear.”