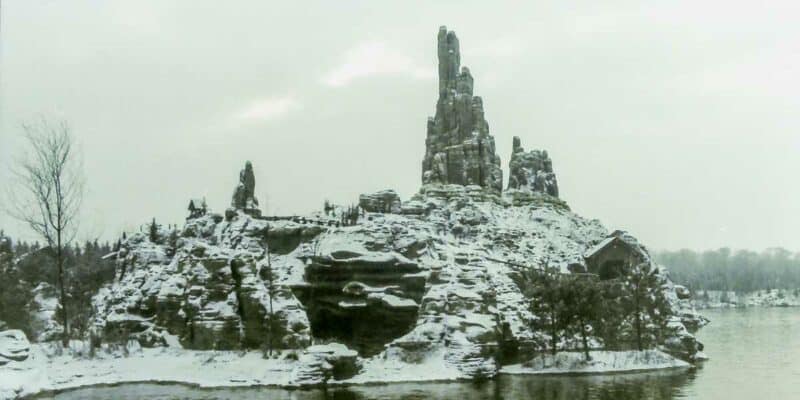 A winter wonderland was to be had this morning at one Disney Park as snowfall covered an iconic landmark.

Disney Parks are spread across three continents, and thus, are susceptible to the weather and environment of those locations. It is common for the Walt Disney World Resort to have hurricane measures in place, being in Orlando, Central Florida, for example. While the United States theme parks, Disney World and Disneyland Resort in Anaheim, Southern California, are unlikely to ever get so cold that snow falls, other Disney vacation destinations do.

The European Disney Resort, Disneyland Paris, is currently experiencing its winter. From cooler temperatures to rainfall and wind, Disneyland Paris Guests can face seasonal barriers while on their trip to Disneyland Park, Walt Disney Studios Park, or Disney Village. And when the cold is just cold enough, snow can fall on the Resort, taking the Disney magic even further.

New images coming out of France this December day have shown various locations covered in snowfall. A tweet from former Disney Imagineer Jim Shull (@JimShull) showed how Big Thunder Mountain in Disneyland Park has been taken over by snow:

Your moment of Winter zen viewing a snow covered Thunder Mountain in Frontierland at Disneyland Paris. I’d hurry outside to walk in the freezing weather and watch the snow fall on the town of Thunder Mesa. Amazing and believable environment. #Disneylanparis #snow

Your moment of Winter zen viewing a snow covered Thunder Mountain in Frontierland at Disneyland Paris. I’d hurry outside to walk in the freezing weather and watch the snow fall on the town of Thunder Mesa. Amazing and believable environment. #Disneylanparis #snow pic.twitter.com/pv2MtgY4uP

Another tweet from @dlrpfans presents a second angle of the snow covering Big Thunder Mountain and another of the giant Buzz Lightyear found in World of Pixar’s Toy Story Playland at Walt Disney Studios Park:

There were reports that snow had fallen on Avengers Campus, too, but this third tweet, by the way of Joseph T. (@thediskneebear), shows the Disneyland Paris landmark, Sleeping Beauty Castle, also with a light dusting of snow:

The snowfall at Disneyland Paris comes as the Park continues its 30th anniversary celebrations. The occasion saw new experiences like Disney D-light, and Dream… and Shine Brighter! come to Disneyland Park. The former is the drone pre-show to the classic Disney Illuminations while the latter is the colorful, energetic parade taking over the lands across the theme park.

If Guests want to experience Disneyland Paris in the winter and maybe get a chance to see a snow-covered mountain, then a valid ticket plus a theme park reservation is needed; the latter is only required when using a non-dated ticket. And then if a Guest wants to ride an attraction in the snowfall then Disney Premier Access One and Disney Premier Access Ultimate are the paid “FastPass”-style services similar to Disney Genie+ found in the US Disney Parks.

It seems not just in Arendelle snow can fall…

Have you ever visited a Disney Park in the snow? Let us know in the comments down below!